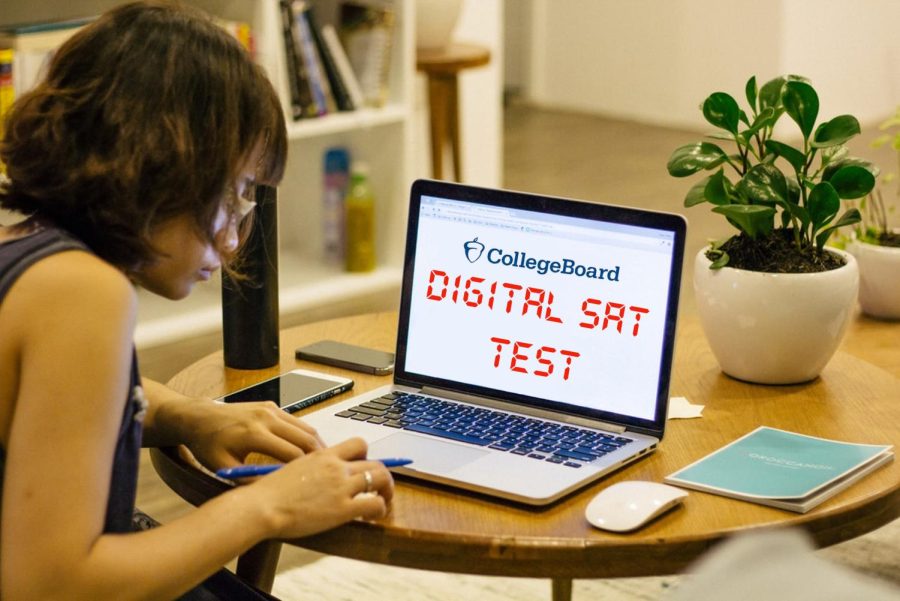 As you squeeze into the tiny desk, desperately hoping that the months of studying will pay off, formulas, grammar rules, and test strategies swirl around in your head. Three hours of solving problems, bubbling in answers, and–ultimately–preparing for your future pass by in a blur, followed by an agonizing, weeks-long period of waiting for your scores. This tried and true academic tradition has been distinguishing students’ college readiness for almost a century, but some of the biggest aspects of the test will be changing soon.

College Board, the familiar mastermind behind the SAT, announced earlier this year that the infamous college admissions test would be going digital internationally in 2023, and in the United States in 2024.

Vice president Priscilla Rodriguez of the College Board states that “The digital SAT will be easier to take, easier to give, and more relevant.” The testing time will be reduced from three to two hours, scores will come back in days rather than weeks, students will have more time per question, reading passages will be shorter but cover a larger variety of topics, calculators will be allowed on the entire math section, and every test taker will have a different test form to strictly prevent cheating (CNBC).

Pembroke Pines Charter High School Assessment Specialist Mrs. Pearl Moses explains, “[College Board has] been piloting this for quite some time, somewhat here in the US and internationally as well, and so what I gather is that things have gone well in the pilot phase to where they would decide to transition to a fully digital SAT.”

When it comes to the test takers’ experience, though, sophomore Natalie Tsung weighs both the benefits and downsides of a digital SAT. “Personally I’d rather not take the SAT online because it’s harder to visualize. I also prefer paper because it’s easier to annotate and to do your work on the same page, and that allows me to make fewer mistakes. When I’m online, my eyes also get strained. However, I think all of this is compensated for by the test becoming shorter,” she expresses. But senior Jena Legaspi believes the change in testing experience is unfair, explaining that “They’re making [the SAT] shorter and easier when us and so many other generations of kids before us had to wake up early to take a four hour test on Saturday mornings… they should at least keep it the same in terms of difficulty.”

For junior Matthew Castillo, who’s taken the SAT before, the change is just too little, too late. He states, “I feel like it’s unfair…for the kids in the class of 2021 and 2022 who really had to go through the brunt of junior and senior year in the Covid times when the SAT’s the most important… and I feel like that was an unnecessary danger for them… So by it being now online for the kids who don’t particularly need it because they’re not at [as much of a Covid risk]… it’s just too late of a deal…there’s no reason for it to go online at this point,” he communicates. Junior Jeylah Valdes agrees; “I think it will make it easier for [digital test takers] to get better scores, which I think takes away from the competition part of academics,” she expresses.

On the other hand, despite declaring the change is “mid”, freshman Martin Pereira adds, “I think [the digital SAT will] be better because you’ll be able to get your scores back faster…on paper or digital it’s the same concept and same types of questions, it’s like the same test but just a different format…so I don’t really think it’s unfair.” College Board’s decision to bring various  changes to the SAT in the coming years has clearly prompted mixed reactions from students;  junior Emma Schenker reveals, “I think that it’s great that they are doing it and they had to do it at some point, but as a junior I’m a little petty that it wasn’t for us. But it’s still good that it’s happening,”

Similar to the students’ mixed opinions, PPCHS Assessment Specialist Mrs. Moses believes that students will have mixed testing experiences. She states, “I think that it depends on the student…Because we are in the digital age and students are used to doing things electronically… I think this could be a benefit to some students, but for students who really prefer the paper tests, I’m not sure if the SAT would give accommodations to [them].”

On top of affecting the test takers’ experience, though, the change from paper-and-pencil to digital may affect the college admissions process as a whole, especially colleges’ decisions to remain test-optional or not. Mrs. Moses personally feels that test-optional will not last longer than 2 years, but ultimately says, “If [colleges] see that they are still able to get a freshman class that is reflective of their culture, then they might [remain test optional], but I think it’ll be a personal decision for each school.” She further explains, “[The digital SAT] might just give more opportunities for students to take the test, and maybe more test centers will open up, so I definitely think it will affect, in some form or another, [colleges’] decisions to remain or not remain test-optional.”

No matter how you feel about the transformation though, it will be curious to see what the future holds for the SAT beyond going digital. Since its inception, the SAT has gone through multiple changes, including the removal of the essay portion and the SAT II subject tests, as well as a few scoring changes. This digital revamp is just the next in a series of attempts by the College Board to stay relevant, but no one knows what the future holds. Maybe 50 years from now, the SAT won’t even exist anymore.