Trump Makes it to Miami

a Night of Questions and Conflict 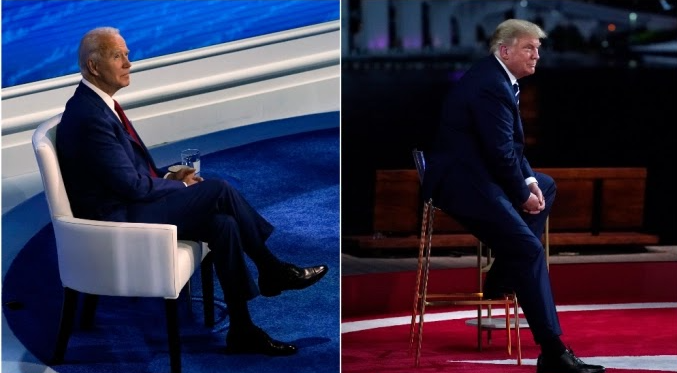 After the chaotic and unproductive first presidential debate, President Trump’s COVID-19 diagnosis, and his subsequent refusal to participate in a virtual second debate, the public finally got the opportunity to learn more about the president’s views and policies in a controlled, conversational environment, in the form of a town hall meeting.

NBC’s town hall took place at the Pérez Art Museum in Miami on October 15 and was hosted by Savannah Guthrie, and in contrast to the debate, allowed local voters to directly ask questions to the president. If you watched the entirety of the town hall, you might’ve even seen a familiar face: Ms. Velez!

The divided pool of voters consisted of Republicans, Democrats, and independents, with some leaning towards their respective party’s candidate, some leaning opposite, and some that even claimed that they were ‘undecided.’

The pandemic was one of the main focuses of the event, including president Trump’s response to the pandemic and his experience with the Coronavirus. Both the host and voters questioned Trump about his symptoms, his decision to impose a travel ban on China and numerous other countries, the status of another stimulus checks bill that Congress has been negotiating for months, mask wearing, and more.

Expressing her thoughts on Trump’s response to COVID-19, and his refusal to take responsibility, freshman Carolina Argüelles states, “I feel like Trump really hasn’t just sat down and realized he needs to take responsibility for the massive loss of American people during this pandemic… There could’ve been less fatalities and cases if he had just agreed with what the CDC was saying instead of putting blame on China like he continued to do during this town hall. He could’ve put many more mandates into place… to have solved this large problem beforehand.”

Other issues that voters asked about, that have proven to be recurring and high-stake issues during this election, include police reform, healthcare, and abortion rights, an issue that tied into another matter of curiosity and concern for the pool of voters: Supreme Court nominee Amy Coney Barrett. Trump was also asked about Roe v. Wade and how she would potentially decide on a case to overturn it.

Trump’s exchanges with Guthrie during the town hall were definitely tense and argumentative at times, and almost insulting, with Trump even laughing and saying “so cute” to Guthrie as she challenged him on QAnon and Antifa. He also asked her “Did you ever hear a word called negotiation? We’re negotiating”, after she added onto a voter’s question about the stimulus bill.

Guthrie, the host, repeatedly intervened during the discussion to ask follow-up questions to Trump, comment, and add onto his responses. While she undoubtedly came prepared to counter and fact-check the president’s claims during the town hall, sophomore Gabriela Carvajal expresses, “After watching the town hall, I couldn’t help but be appalled… When commenting on certain answers [from] Trump, Ms. Guthrie would–in a way– fish out of Trump words that supported a certain thought process… I felt that PROFESSIONALISM wasn’t stressed, as the two conversed… Nonetheless, it was well put together as [Guthrie] did cover most of the content key to a voter’s decision making… I felt she did a better job commanding her presence as a moderator [than Chris Wallace] and dictating which directions the conversation went. So, for that I commend her…”

Whether or not people think Trump’s performance was good, it was a strategic move to hold a town hall in Florida, the same place where Joe Biden held one ten days prior and one of the election’s battleground states.