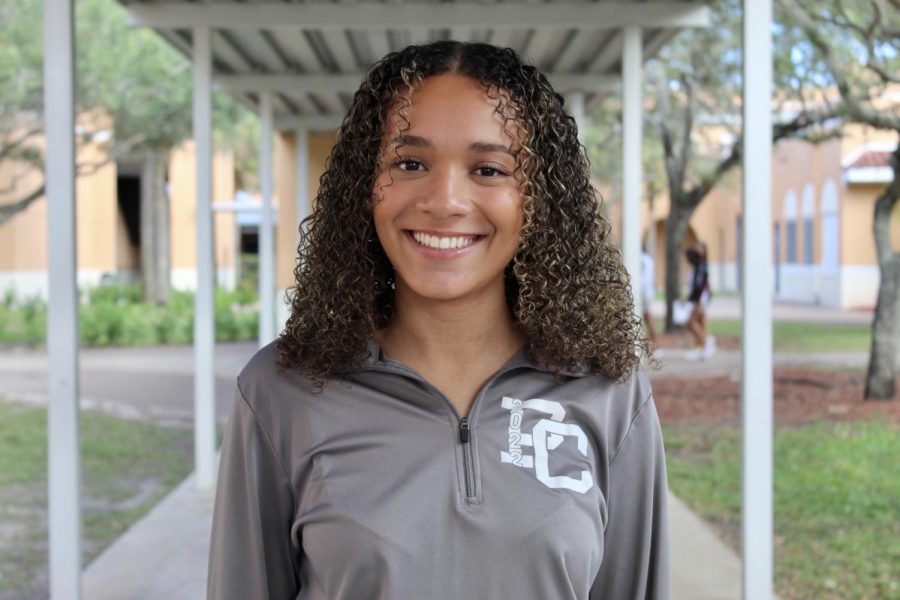 As we step into the new year, seniors are coming closer and closer to graduating from PPCHS, taking many memories with them and leaving some behind.

As they’ve grown with each other over the past three years, seniors have had the chance to get to know the rest of their class. With that, it came time to vote their peers for superlatives, and the winners are here!

The winners for the title of “Most School Spirited” are Lillian McCormick and Julian Villarta.

When asked if she was surprised with her win, Lillian says that she was kind of expecting it.

“I’m very out there and social, so it was easy to get the word around.”

For Julian, a friend of his told him that he should run for the ”most school spirited” superlative because he’d be perfect for the title.

“I didn’t think anyone was running against me, so I was kind of expecting my win,” Julian says.

The winners for the superlative title of “Best Eyes” Kristin Ward and Matthew Jaquith.

Kristin says that she ran for her winning superlative title because she wanted to be able to look back at it in her yearbook many years from now.

“I’ve been told my eyes are pretty since I was young, so I thought it would be perfect. I ran with one of my good friends so it makes it even better,” Kristin says. “When I won, I was so happy and excited to tell my family, and eventually tell my kids later on!”

Matthew says that he ran for the “best eyes” superlative because he’s been frequently complimented on the color of his eyes, and thought that it would be “super cool” to win a superlative.

“It felt really good to know that people also thought I had the best eyes, and it overall felt good to have won a superlative,” Matthew says about finding out he won his superlative.

The winners for the title of “Most Athletic” are Chloe Hernandez and Geoffrey Sprouse.

“I never thought I would be running for “Most Athletic”, but I took a chance,” says Geoffrey. Geoffrey also says that he was surprised to find out he won his superlative title.

“I did not put that much effort or thought into trying to win,” he says. “I definitely was not expecting that.”

The winners for the title of “Best Style” are Adrienne Ospina and Raul Lopez.

Adrienne says that when she found out she won one half of the title of “Best Style,” she was completely shocked and excited.

“I’ve always been into styling and dressing up,” Adrienne says. She was a little afraid of her competition, but was happy she pulled through in the end!

The winners for the superlative title of “Best Smile” are Gabriella Luna and Kenneth Abuchaibe.

Gabriella says that a few of her friends inspired and motivated her to run for a superlative.

“I wasn’t really expecting much from it, and I was really surprised when I won,” Gabriella says. “I also won best smile in fifth grade, so it’s all coming full circle.”

Kenneth says that he was “so excited” when he found out that he won the superlative title of “Best Smile.” Kenneth decided to run for the “Best Smile” superlative once he saw all of his friends running for different things.

“I thought we could all win and I knew I had a good smile because a lot of people told me, so I ran,” Kenneth says.

The winners for the title of “Best Friends” are Jeslyn Chacko and Nia Daniel.

Both Jeslyn and Nia decided to run for this superlative because they thought that it would be a great idea to express their friendship over eight years with one another.

“Many people aren’t as close with their old friends from elementary school, so I thought we were unique in that sense,” Jeslyn says.

Both girls were very happy for their win and to see that their peers had voted for them.

“I felt like we had competition, so I was very surprised we won,” says Nia.

The winners of the “Most Likely to Brighten Your Day” superlative are Miranda Pereira and Paul McFarlane.

“I spoke to some of my friends about it and they thought the category applied to me, so I ran,” Miranda says. Miranda was very happy about her win, and also kind of expected it.

“I love people, I love talking and interacting with people, so I think that gave me the edge.”

Paul says that his personal goal to keep a positive attitude and inspire positivity in others was what motivated him to run for the “Most Likely to Brighten Your Day” superlative.

“I didn’t expect that enough people knew me to the extent of me actually getting selected but it’s great that I’ve had a positive impact on those who chose to vote for me,” Paul says.

The winners for “Most Likely to Be a Millionaire” are Isabella C. Rodriguez and Bennett Pollack.

Isabella’s strong belief in her drive to succeed and her overall hard working character is what led her to run to hold the title of this superlative. She was “definitely surprised” to have won, and was very excited to find out about her accomplishment.

“​​I always thought superlatives were something cool to look back on in the future, and hopefully I will call it a prediction for my future plans,” Isabella says.

The winners for the superlative title of “Most Likely to Be On the Cover of Vogue” are Isabella Cunha and Tyler Hilliar.

Isabella’s overall experience winning the title of “Most Likely to Be On the Cover of Vogue” was an exciting one, particularly because she didn’t run for her title.

“It was shocking to me when I realized I had won,” Isabella says. “I was very surprised that people thought of me for the superlative without me having to run for it, so it was for sure an exciting surprise.”

For Tyler, his experience running for his winning superlative title was a little spontaneous.

“I just kind of let people know last minute,” Tyler says. “I wasn’t really surprised with my win, I expected it.”

The winners for “Best Person to Be Stranded On an Island With” are Emily Martinez and Anthony Fernandez.

“I have literally stranded myself on islands for fun and I love the ocean and being outdoors,” Emily says.

Emily was also not too surprised about her superlative win. “I didn’t really think that anyone else had the same hobby I have and spent so much time out on the water and learning how to survive outdoors,” she states.

Anthony says that his motivation to run for the title of “Best Person to Be Stranded On an Island With” came from his love for the ocean.

“I’ve been in love with the ocean for as long as I can remember, so I thought it’d be cool to be stranded on an island,” Anthony says.

Similar to Emily, Anthony also expected his win for the title. “When I found out I won I got really excited, even though I expected it.”

The winners for “Most Likely to Cure Cancer” are Aliya Khan and Brady Garrison.

Aliya has always known that she’s wanted to go into the medical field, so running for this superlative seemed perfect.

“When I won I was very happy,” Aliya expresses. “It made my day. I was surprised, and am so grateful that I won. Thank you to everyone that voted!”

For Brady, winning the title of “Most Likely to Cure Cancer” was a complete surprise to him since he did not run for the superlative. Brady has always been interested in STEM, and has plans to possibly become a biomedical engineer.

“I feel so grateful to anyone who voted for me for this superlative,” Brady says.

“I will do my best to live up to the title. Thank you to everyone who voted for me, and thank you to PPCHS for having so many great STEM opportunities!”

Lastly, the winners for the superlative of “Most Changed From Freshman to Senior Year” are Aminda Dubuisson and Danny Lawrence.

After making some changes to her lifestyle over quarantine, Aminda decided that it would be a great idea for her to run for the title of this superlative.

“Changing my way of living reflected on the outside, so when finding out there’s going to be a superlative that will reflect on my hard work, I knew I had to run,” Aminda says.

Aminda also says that although she had competition, she still expected her win. “I still had my doubts, but I’m glad my fellow classmates saw the change that I worked so hard for over quarantine.”

For Danny, the time given to him over quarantine also led him to better himself and set himself up to win this superlative.

“I was pretty surprised to win,” Danny says “I mainly worked out for myself, and didn’t expect my change to get recognized too much.”

Overall, the incredibly hard-working, talented, memorable class of 2022 gets another chance to see the Jag prints they’ve left on one another, and continue to leave more on the campus they are soon to leave behind.