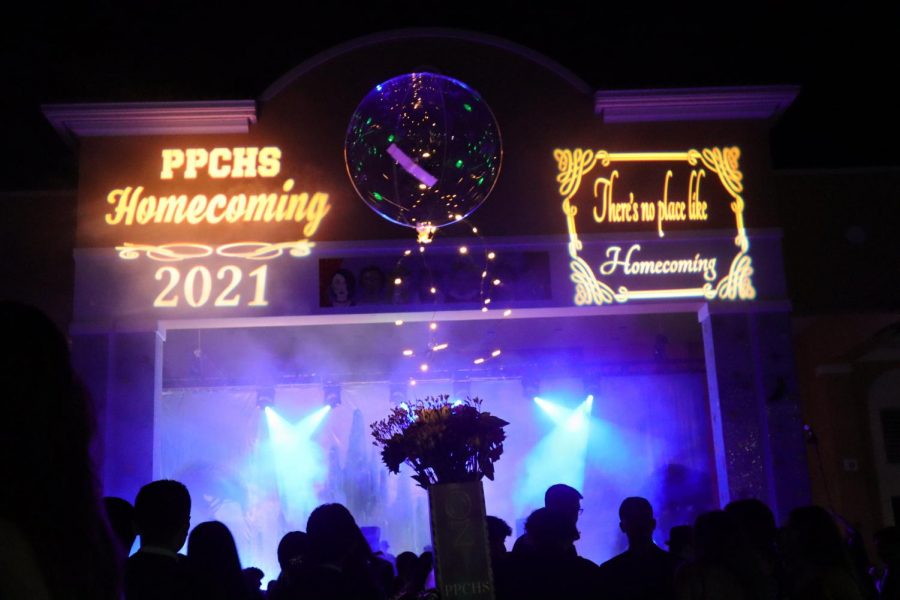 Satin dresses, high heels, suits and ties fill the courtyard with a new essence, embracing a different look than what students are accustomed to seeing. The sea blue and emerald green glows of beaming light, along with bubbles bursting into mist, made the courtyard where everyone once gathered in polos and khakis a complete contrast to the Wizard of Oz themed Homecoming. Now draped in shimmering decor and a moonlit sky, the foggy dance scene was set up to the last detail.

Stepping into a new world, the yellow brick road led eager students to a photographer ready to snap pictures of smiling faces and glamorous outfits. The theme is present throughout with the movie playing in the auditorium the entire night. “There’s no place like homecoming,” Dorothy’s red shoes, and other references to the film are strategically placed. As the high schoolers saunter further into the setting, the dance floor calls their names. Approximately 350 peers await, sitting on cushioned white seats, gathering amongst tables, and getting prepared for an unforgettable night ahead. A conga line formed, zig zagging through the night, along with endless salsa dancing and the cha cha slide. Music boomed through speakers with a DJ blasting music of many genres as everyone sang along.

The homecoming dance didn’t just set up itself, however. Thanks to the Pines Charter Student Government Association and a team of teachers, students and parents working to put everything together, it went smoothly and was executed to perfection. Beginning their laborious hours of diligence, helpers showed up to the school bright and early at 7 am. Camila Correa, a sophomore who assisted with the set up, comments that with thorough organization, “planning really saved us.” A senior who oversees the Homecoming committee, Alexis Galletta, adds that twelve hours before the event started, the crew “worked on centerpieces and decorations.” She included details on their extensive journey which entailed strenuous planning since August. Oftentimes, the efforts necessary to create a school event are swept under the rug, such as including “major decorations, a dance floor, and lighting.”

To say the least, their hard work paid off. Correa believes when it came together “it was quite impressive, especially with the fireworks and fog bubbles.” Decorations and effects like that add to the entire experience and make it all worthwhile.

With previous school events and dances cancelled due to the pandemic, fun was put on a devastating hold, until now. After not having the ability to gather with friends or have a good time in general, spending a cool November night “being able to see friends and have fun” was something sophomore Madison Martone had high hopes and anticipation for. Overall, the night was memorable. Delicious donuts, fried oreos and other scrumptious snacks were provided along with unlimited drinks. One of the main attractions, though, was the honorary crowning of Felix, a security guard at PPCHS since the student who won was absent. The crowd chanted his name as he walked up to the stage and “got the crown” as Martone notes. The 2021 Homecoming king and queen, Nicole Llanes and Domenic Lacayo were not only the pair with the most votes, but are also a couple, making their win even more special.