Tattoo Tell Alls: The Meanings Behind Tattoos Around Campus 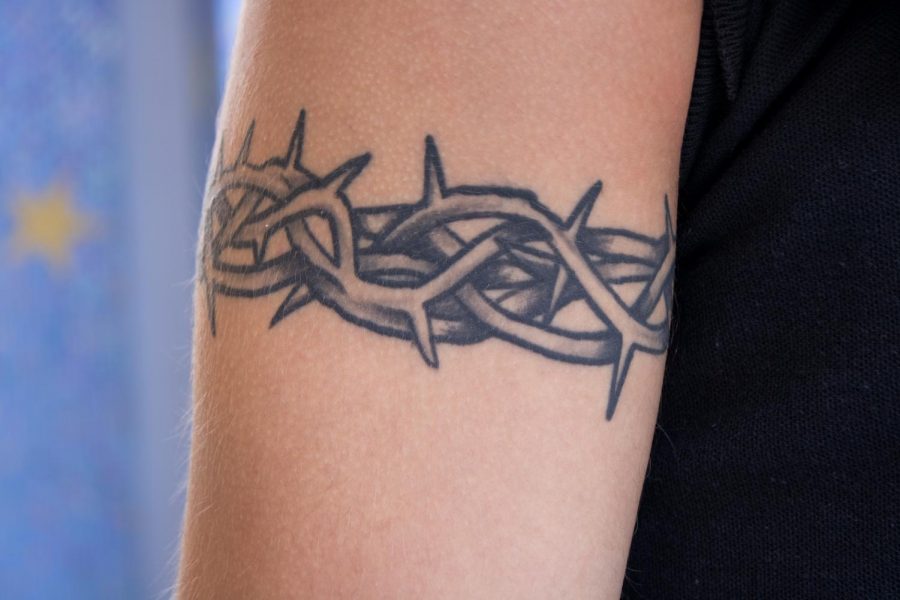 Maybe it was just a bad decision. An impulse. Something you did out of spontaneity. Maybe it was a dedication to a special someone or something, or even a dare. Every tattoo tells a special tale. These permanent ink designs can be found on just about anyone with a good story, and on many around campus.

Sophomore Amber Guevara is well known for her leg tattoo of a phoenix, the symbol of resurrection. Amber got this tattoo as a tribute to her grandfather. “My grandpa, who has passed, really enjoyed birds,” Amber says. “I like to think he’ll always be with me, so I decided to get a phoenix in memory of him.”

Senior Christian Ibanez has a tattoo on his left wrist that reads “P.IV.XIII.” His tattoo is in Roman numerals and represents the Bible verse Philippians 4:13, which reads “I can do all things through Christ who gives me strength.” To Christian, this tattoo serves as a personal reminder to persevere through all aspects of his life. “It reminds me to never give up, and that nothing can stop me when I have God by my side. It’s my life verse and something I live by each day,” Christian says.

Junior Michael Ottati has a meaningful tattoo of the crown of thorns across his bicep. His tattoo serves as a reference to the crown of thorns in the Bible that was placed on Jesus’s head. “By having it wrapped around my arm I feel as if I’m wearing it too, always carrying my own sins and hardships but never giving up no matter the sacrifice,” Michael says.

Senior Camille Guevara has a tattoo on her leg representing her favorite anime series, Hunter x Hunter. “I really like the show and it just gives me childhood memories,” Camille expresses. “I want to remember it forever.”

Sophomore Sebastian Senese has a tattoo on his torso of a stick figure riding a skateboard. A friend of his owns a tattoo gun, and Sebastian impulsively got the tattoo from his friend. “The stick man’s name is ‘Skater-Man Seb,’ Sebastian says. “That’s what my friends started calling me because I skateboard, so I got a tattoo to represent that.”

Whether the meaning behind it is a good memory or a bad one, tattoos are statements. They’re stories. Just like the person it’s permanently attached to, every tattoo is unique and special in its own meaningful way.