We, the Jaguars, Read the Constitution. 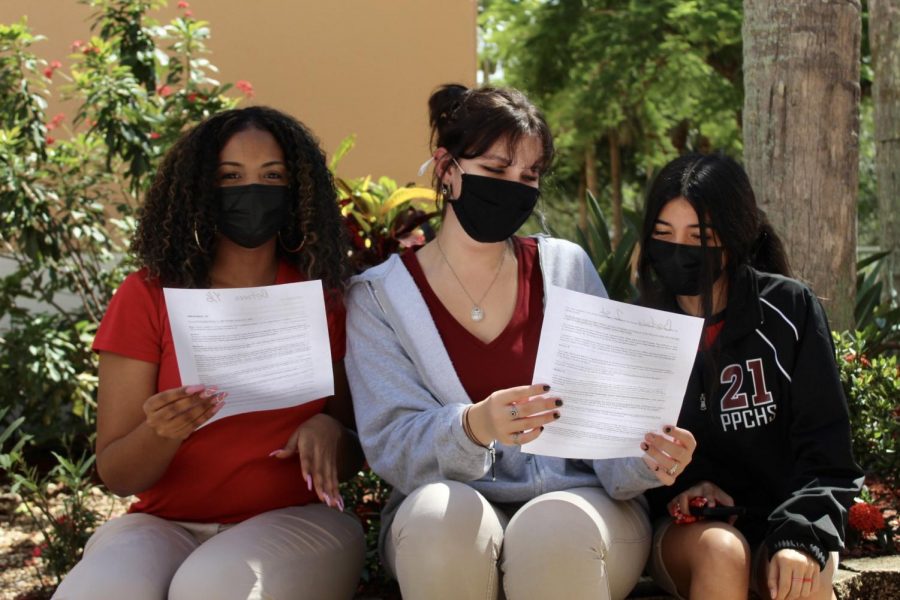 On Wednesday, September 15, at 7:05 AM , senior Erin Luis became a focal point of attention. The sky was still a soft orange and the chatter of arriving students made it seem like a typical early morning–except for a group of seniors including Luis, who had other plans. Armed with a megaphone in one hand and a paper in the other, she stepped onto the fountain and those who noticed wondered what she would do next. The megaphone screeched with feedback. Taking a deep breath through her mask, filling her body with air; she straightened herself as she read the evocative Preamble:

Her voice went into a gradual crescendo as she continued; gathering both courage and audience.

Onlookers below her filmed and cheered her on when she neared the end of her section as the final morning bell served as a warning. Once finished, she stepped down from the fountain and made her way through the crowd of shuffling bodies where students of all grades would ask questions.

“What were you reading?” “What happened?” “What’s going on?”

“I read some of the Constitution for extra credit,” she explained, “It was pretty tiring, but I am happy to be participating.” With that, Erin Luis walked to her 1st period class, her mission complete.

Mr. Quigley, the one who envisioned this annual event, teaches AP Government and Economics along with Ms. Hyacinth at Pines Charter High. Constitution Day, on September 17th marks the day it was signed– 243 years ago. The state of Florida requires an educational activity on that day;

Quigley, in 2011, had an idea. “I started teaching 10 years ago… I didn’t want to do something in class, some tedious assignment, and then it hit me,” he said, “Wouldn’t it be great if our own students starting before school, during school, and after school read the entire Constitution in one day?”

It meant seniors would be reading its 4,593 words from start to finish. Before 1st period until after 6th period. Those who participated, wearing something patriotic, would be rewarded bonus points.

“The purpose of this is to emphasize, even for one day, that the Constitution is so essential to American life that we need to hear every word of it.”

With that in mind, his idea was put into action–and 10 years flew by.

Like a lot of Charter traditions, it started small and has grown immensely. In a non-Covid year, the words of the Constitution would resonate in every building, every hallway, the fountain, and even under the staircases, where groups of 3-6 seniors were stationed. Although this year students are not allowed to read inside, both teachers have worked on a system to have the volunteers alternating turns so that everyone from different classes are evenly distributed.  The Constitution was successfully read over 2 days due to block scheduling this year.

Only half of the seniors take the AP Government and Economics class; even less seize the opportunity to recite the document. Mr. Quigley and Ms. Hyacinth remain in their classrooms during the reading, and will hear about how it went afterwards through anecdotes or comments. It is up to the readers that the event goes smoothly; they practice on their own and recite it on their own. Reading the constitution is the ultimate extra credit: you must say it loud and proud.

Most importantly, Mr. Quigley wants the students to be aware.